An important factor that distinguishes Toyota from other major automakers is the company’s president, Akio Toyoda. Known as a veteran driver, Toyoda is a motorsport enthusiast who personally led an LFA to victory at the Nürburgring 24 Hours and played a key role in the creation of Gazoo Racing. More importantly, Toyoda has poured enormous resources into his company’s racing divisions, which has resulted in Gazoo winning the last four runs of the 24 Hours of Le Mans as well as grabbing first or second place in the last four WRC constructors’ championships. Not to mention the latest Dakar Rally victory.

These efforts in racing have not only strengthened the company’s reputation or image but have also allowed Toyota to apply the lessons it learned from motorsport to its production models. The latest Toyota model, which was developed using the company’s racing experience, was the new GR Corolla. A special variant of the high-performance Gazoo Racing, the GR Corolla is packed with features from Toyota‘s road and rally racing experience. These; Front MacPherson struts and rear double-wishbone setup, GR-FOUR All-Wheel Drive, 18” 15-spoke cast wheels, Multiple ride modes including Track tuning, a sport-tuned suspension package with triple muffler, exhaust setup, a new front grille, a rear diffuser A functional front bumper air intake, a track-adjusted aero kit consisting of bulging air outlets in the hood, and extended fenders to match the GR Corolla’s wider stance.

Available only with a six-speed manual transmission, this GR car is powered by a turbocharged and intercooled 1.6-liter inline-three G16E-GTS engine, providing 300 hp and 273ft-lbs (370 Nm) of torque. In the interior of the vehicle; There are numerous GR-specific highlights, such as a unique instrument cluster supported by a TFT display, short-stroke gear lever, traditional hand-operated e-brake, GR leather-wrapped steering wheel, and special sports seats. 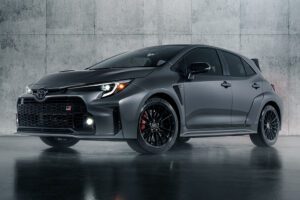 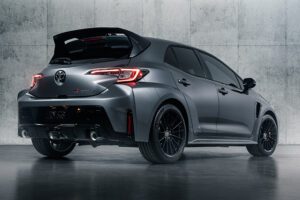 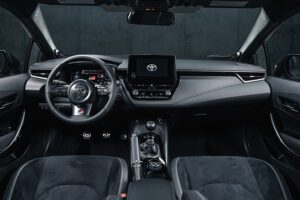