In 1971 Ford‘s racing department was tasked with building a “SuperVan” with a high-performance, mid-mounted Le Mans-specific engine taken from the brand’s iconic GT40. This became the Transit Mk.1. This project was followed by the Transit Mk.2, which used the 590hp Cosworth V8 of the C100 race car, with a fiberglass body, and monocoque frame. Then an Mk.3 appeared with the 3,650 hp Cosworth HB Formula 1 engine. Almost three decades after the third generation SuperVan was introduced in 1994, the project has returned to give the high-performance van, dubbed the Ford Pro Electric SuperVan, a modernized, all-electric look.

Full recharge in only 45 minutes.

Based on Ford‘s newly launched E-Transit Custom, the first all-electric version of Europe’s best-selling transit van, this unconventional vehicle is built around a motorsport-specific chassis. Four electric motors producing almost 2,000hp were used instead of the gasoline-powered engines used in Ford‘s previous three SuperVan builds. These four electric motors are powered by a 50 kWh, liquid-cooled battery pack mounted on the bottom of the van to optimize the center of gravity and weight distribution. Ford Pro Electric SuperVan, which can be fully charged in just 45 minutes, can accelerate from 0-60 in less than 2 seconds.

The body and aero kit of this latest SuperVan was developed in collaboration with Ford Performance and Austrian STARD, using a range of cutting-edge composites. It features a sharp front splitter, side skirts, enlarged wheel arches, a large rear diffuser, an array of onboard cameras, an advanced traction control system, launch control, and three-stage regenerative braking.

The SuperVan has been largely gutted and added an FIA-specific roll cage, racing seats, and a SYNC touchscreen 2 that allows the driver to choose from specific driving modes (Road, Track, Drift, Drag, Rally). 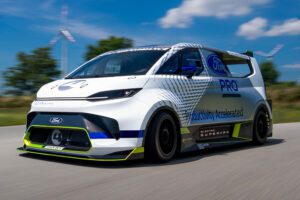 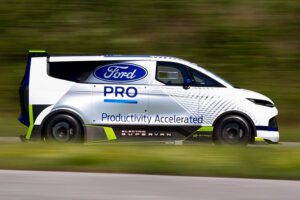 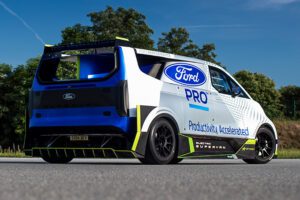 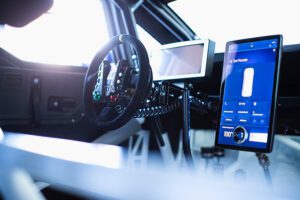