Since signing the contract with Audi in 2021, we’ve seen many projects come out of the official partnership between Ken Block and the Ingolstadt team. We’ve already featured Block‘s personal Audi Sport Quattro “repli-mod” from the 1980s and the S1 e-tron quattro “Hoonitron” gymkhana prototype. Drift and rally legend Ken Block has now chosen one from a small fleet of RS e-tron GT models that Audi has made available to him and the Hoonigan team and refurbished for everyday use.

Block‘s new everyday car, representing the fastest RS model in the world, started as an RS-spec e-tron GT, but added 35 kW (26 hp) to the already powerful 440 kW (590 hp) two-motor configuration, increasing to a total of 475 kW (637 hp) and more than 840 Nm of instant torque. Block also invited official wheel sponsor (and neighbor) Rotiform to outfit its new Audi with a set of six-spoke wheels with aero disks and sport tires from the official tire sponsor TOYO.

While the RS-spec e-tron GT remains largely standard esthetics, they didn’t leave it without a few important touches. Like the Sport quattro “repli-mod,” Block‘s new e-tron GT is painted in matte white with a solid white hoonigan and sponsor logos. This plain white paint contrasts with the carbon fiber intake trim, a carbon-fiber roof, and red brake calipers, as well as the black splitter, grille, mirrors, and trim. The final touches to the car are the same cream color and the suction cup roof box with Audi, Rotiform, TOYO, and Hoonigan signatures.

Just like the Sport quattro “Repli-Mod” and the S1 Hoonitron Prototype, this new everyday car from Block makes us incredibly curious about the Gymkhana race cars that are being created in collaboration with Audi. Click here for more information. 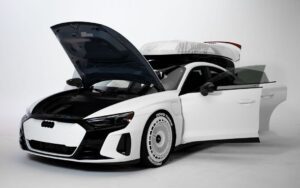 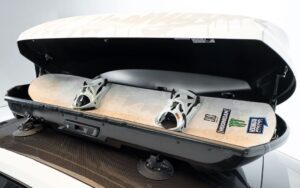 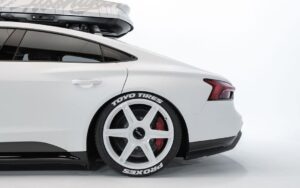 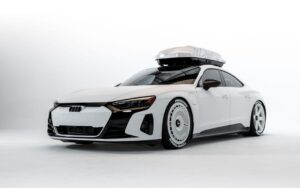 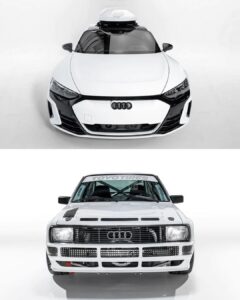 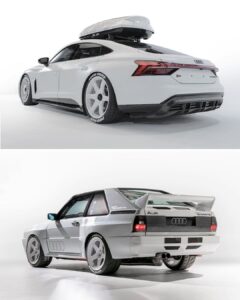 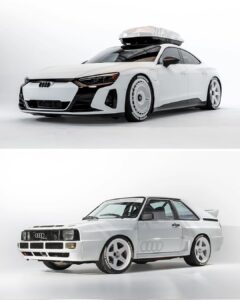 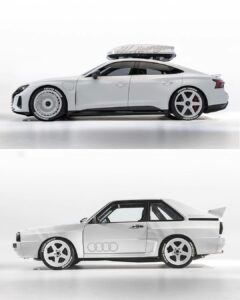 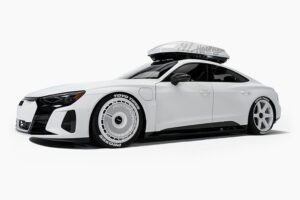 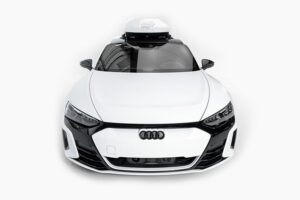 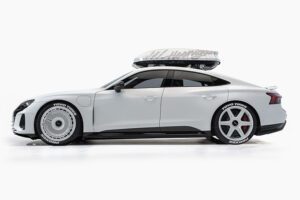 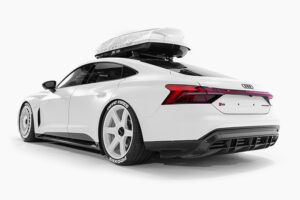