Drift and rally legend Ken Block, who spent the last few years sponsored by Ford, started working with Audi, which will prepare the next racing and Gymkhana machines. In this article, we take a look at the first images of Audi on YouTube, called the S1 e-tron quattro Hoonitron Gymkhana Prototype, prepared for the famous drifter as part of the launch.

Designed and built in just six months, the prototype represents the first Gymkhana car built entirely by a factory, rather than modified by the Hoonigan team. Ken Block reached out to Audi to ask them to electrify one of the S1 models, but Audi chose to take it even further, commissioning its design center in Ingolstadt, Germany, to completely modernize one of the Group B race cars to make it even better.

As a result of the work of engineers working in Audi‘s racing and R&D departments, the S1 Hoonitron has state-of-the-art mechanical equipment and an all-electric powertrain. This ultra-modern interpretation of the S1 is supported by a complete aero kit and extended fenders.

The S1 Hoonitron borrows some visual elements from Audi‘s electric Dakar racing car project, as well as innumerable details such as the attachment of the rear wing and rear fenders that pay homage to the original S1 Pikes Peak.

Long story short, this next Gymkhana car from Ken Block, riding on a custom aero disc-equipped wheelset, hides a lot of the tech and features used in Audi‘s Le Mans, Dakar, and Formula E racers. 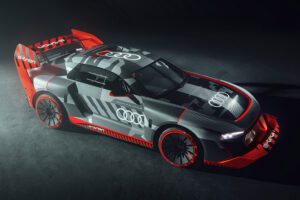 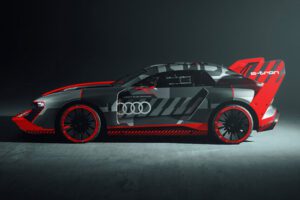 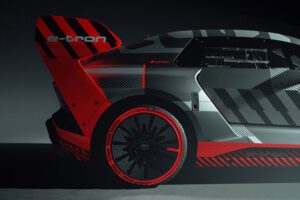 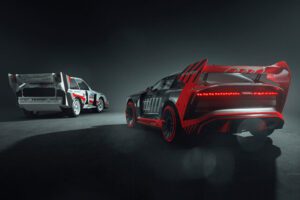