Gymkhana is back and this time all electric.

Ken Block and Hoonigan are back to drive us crazy with another installment of their physics-defying driving series called Electrikhana. As the name suggests, there is no combustion engine in sight. Instead, we watch the incredible Audi S1 ​​Hoonitron, an all-electric, 1,400-hp, all-wheel drive, Pikes Peak-inspired coupe. This is literally a riot.

Shots from Electrikhana, mostly on The Strip, in Las Vegas, featuring copious amounts of tire smoke and incredibly bright and dazzling lights.

“The instantaneous torque of an electric motor has allowed us to take some trickery into a whole new field,” Ken Block said in a statement. He adds, “From extremely exaggerated backward entries or flawless high-speed 360s and four-wheel smoking launches, this Hoonitron is an all-new experience in our Gymkhana world. The final, tire-killing, center axis donuts reached wheel speed of over 140 kph, and created G forces I have never experienced before in any racecar.”

Even at the age of 54, we still can’t get over the video of Ken Block, who, while behind the wheel of an 800-volt supercar, can perform incredible stunts and rides like no other, to Travis Pastrana.

Director Brian Scotto said in a statement, “Vegas is such a unique place, it’s literally pulsing with energy at night, and that’s what we wanted to capture by going there,” Director Brian Scotto said in a statement. “It’s still shocking to me the level of access we pulled off. We locked down The Strip for hours. I haven’t had that ‘Can’t believe they are gonna let us do this’ feeling since Gymkhana Five in San Francisco.”

You can find the video of this wonderful Electrikhana show at the end of the article. We strongly recommend using your headphones. 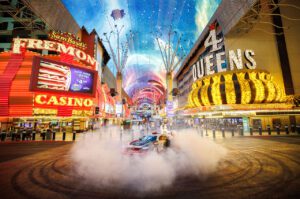 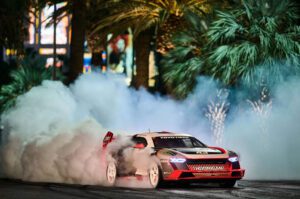 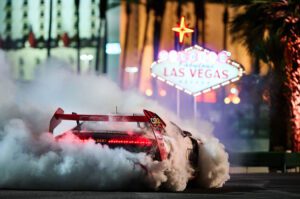 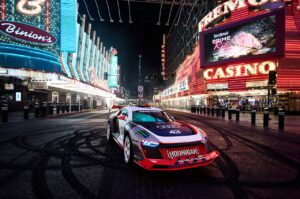 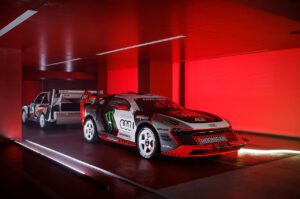 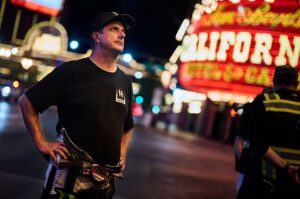