Founded in the late 1950s and beginning to sink in the mid-80s, Bultaco was an iconic motorcycle brand headquartered in Barcelona, ​​Spain. Almost forty years after the company closed its factory doors, Bultaco remains fondly remembered by the contemporary motorcycle community. As proof of this, we can show the work of Cafe Racer Dreams, which was developed by directly inspired by Bultaco‘s Frontera 370 Gold Medal and named #CRD128.

Rather than using one of the Frontera 370‘s 363cc two-stroke single engines, the CRD team chose to build the project around a 1983 BMW R80RT and an air-cooled boxer engine. Made even more impressive by the fact that this entire project was completed in just six weeks, the bike has been heavily upgraded with a modern component package that includes Hagon rear shock absorbers and an inverted Showa front end complete with dual-disc front brakes. In the breathing part of the motorcycle, K&N pod filters, a new Bing carburetor, and a low SuperTrapp exhaust were preferred.

To pay homage to the Bultaco that inspired them, the CRD team outfitted the BMW with a complete tank, headlight, and headlight cover from the Frontera 370 Gold Medal of the 1970s. Additional visual improvements include a floating tractor-style seat upholstered in suede and leather, a high-mount front fender, and a rear fender with number boards suspended on either side of the motorcycle. Sitting on forged wheels fitted with Continental Twinduro tires, the build also houses Italian-made Tarozzi rear sets, a Motogadget Motoscope Tiny display set in a custom enclosure, Renthal handlebars fitted with new Domino Rally grips, LSL reservoirs, and handlebar end circular mirrors.

With nearly 130 completed projects, it’s no surprise that CRD has developed the skills necessary to deliver world-class custom builds like this Bultaco. If you would like to know more about #CRD128, you can get more information on the Spanish company’s website. 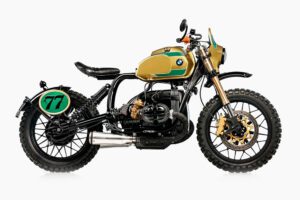 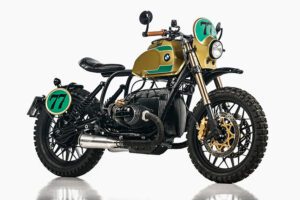 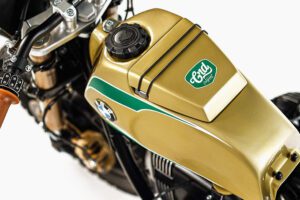 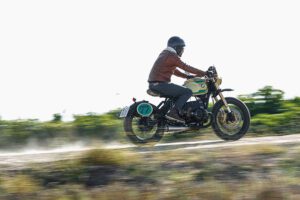