There are countless examples of a BMW-based project that has been simplified and transformed into a Cafe Racer. Therefore, it has become extremely difficult to find a truly new approach to this popular platform. Nevertheless, MOTOISM has achieved the feat with its latest creation, a BMW K100 called “The Ultimate K”.

The company, which started with the 1983 K100, has removed the subframe and superstructure except for the fuel tank, limiting itself to the chassis. This incredible structure, with its sleek and modern look, features a series of backlit aerodynamic fins laser-cut from acrylic.

The Ultimate K is a collaboration between MOTOISM and motorcycle store IMPULS and has been fitted with numerous small additions such as custom black and white roundels, Motogadget grips, a custom LED and a blacked-out exhaust system. The build’s suspension has also been upgraded, the front lowered, and new springs installed, while the rear of the bike uses a custom Öhlins mono-shock. The finishing touches of the project are made with an Alpine White look that contrasts with the hand-drawn red fine lines.

While The Ultimate K by MOTOISM x IMPULS is not for sale, each component that makes up the project can be purchased individually or in bulk. Click here to get more information. 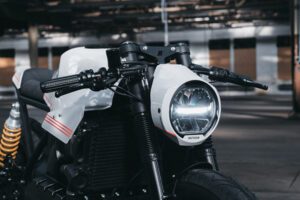 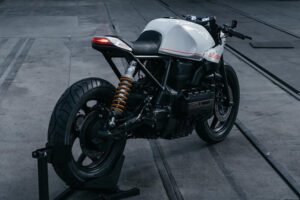