While Alfa Romeo‘s SUV catalog isn’t very extensive, the Stelvio serves as a family-friendly favorite for anyone looking to tap into the Italian brand’s strengths. After roughly two years of anticipation, Alfa has finally expanded its SUV portfolio by introducing the Tonale SUV, which offers the manufacturer’s first plug-in hybrid powertrain option.

The Tonale will offer several hybrid powertrain options with a range of equipment options. The strongest and most interesting of these is certainly the Q4 plug-in hybrid offering. The PHEV (Plug-in Hybrid Electric Vehicle) Tonale’s Q4 is equipped with all-wheel drive and offers a best-in-class range of 50 miles (~ 80 km) on electric only. An impressive 275 horsepower has been achieved by combining the 1.3L MultiAir turbo petrol engine that powers the front wheels and a 15.5kWh battery that powers the rear.

The interior of the Tonale is similarly high-tech. It features a “Telescopic” instrument cluster with both a 12.3-inch full-digital display and a 10.25-inch touchscreen. While users will be able to access over-the-air updates via Alfa Connect Services, they will also have Amazon Alexa voice integration as standard.

Alfa claims the Tonale is the first car on the market to be equipped with an NFT digital certificate, recording vehicle data as immutable tokens and acting as a solid digital record of vehicle history. Having a very stylish appearance, Tonale reveals that the luxury brand adheres to its glorious racing heritage with its design language.

Considering that the Tonale won’t hit the market until the start of 2023, Alfa Romeo enthusiasts will have to wait longer. In fact, we are looking forward to the arrival of the Alfa Romeo Tonale SUV, which does not have any official pricing information yet to be officially announced. Click here if you want more information. 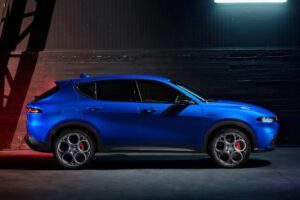