In mid-2019, Triumph Motorcycles announced that it had embarked on a long-term project to bring a state-of-the-art electric motorcycle to market. Known as the “TE-1,” the two-wheeled electric vehicle made its debut in drawings in March last year, but the Hinckley firm has now announced that it has completed the third phase of this ambitious project and has unveiled a working prototype.

The TE-1, which will soon begin live testing, is based on the British bike brand’s popular Street and Speed ​​Triple models. However, while keeping the design language of these naked models, we see that their inline triple engines have been replaced by a state-of-the-art EV powertrain. Work on the TE-1 continues with an ongoing collaboration between Integral Powertrain Ltd., Williams Advanced Engineering, and WMG at the University of Warwick.

Built around a custom chassis and subframe, the prototype TE-1 is equipped with prototype Öhlins RSU suspension, Brembo M50 monobloc calipers, carbon fiber side covers, a WAE-developed carbon battery housing, and Triumph’s own proprietary motorcycle control software. Sending power to the ground via a Gates Carbon belt drive, the powertrain at the heart of the prototype features a scalable integrated inverter as well as a combined engine that combines silicon carbide switching technology and an advanced integrated cooling system.

The fourth phase of the TE-1 project will consist of a series of road tests including throttle calibration, powertrain mapping, thermal optimization, drive mode improvement, range, and battery consumption assessment. After these tests, new tests will be carried out that will focus on driver assistance systems such as handling, acceleration, and traction control. No word yet on price or availability, although we think it’s only a matter of time before Triumph launches the TE-1. If you want to know more about this futurist electric motorcycle, click here. 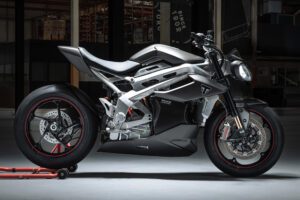 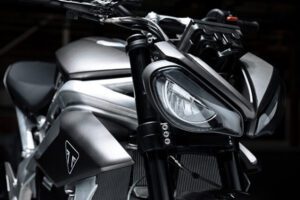 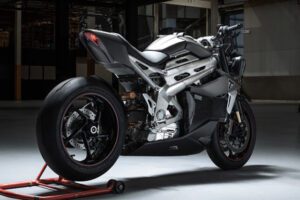 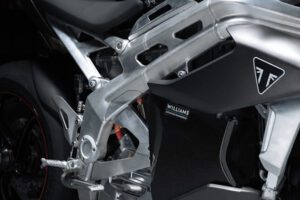