In the last half year alone, Toyota‘s first-generation Land Cruiser has gained immense popularity, more than doubling in value and continuing to rise steadily. A resurgent interest in the model has required the addition of a new modern version of the FJ/BJ, known as the Compact Cruiser EV Concept, to the Toyota EV range.

Designed by the Toyota Europe Design development center in Nice, France, the Compact Cruiser EV is built on top of a contemporary all-electric powertrain that delivers plenty of torque for the dirty job. Borrowing visual cues from the first-generation Land Cruiser, this modern take on the classic all-terrain vehicle has retained the box-like appearance of the 1950s model while bringing it into the 21st century with more modern touches such as stylish LED lighting at the front and rear and prominent fenders. Based on Toyota‘s off-road heritage, this concept is launched by Toyota as a lifestyle vehicle and states that you can use it for both daily commuting and light off-road driving.

With a distinctly sleeker look than the current latest FJ Cruiser, the Toyota EV Compact Cruiser features an upgraded suspension setup, retro-inspired five-spoke wheels, a low-profile roof ladder, front tow hooks, and LED lighting almost throughout. The rail-type roof rack system extending to the tailgate of the vehicle is integrated into the front bumper of the concept and there are also details that look like a cooling system.

No clues about the production of this Toyota EV concept

First unveiled at the Mega Web park in Tokyo last December, the Toyota EV Compact Cruiser Concept was recently crowned with the Car Design Award for Concept Vehicles during the annual Milan Design Week. It’s unclear whether Toyota has any plans to put this concept into production, but the Compact Cruiser EV still hints at the brand’s future design language. Click here if you want more information. 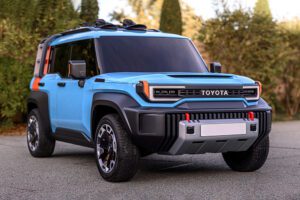 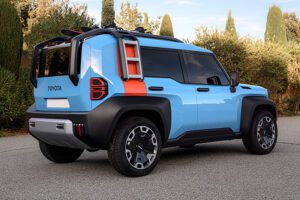 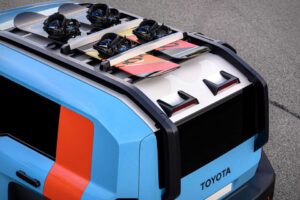 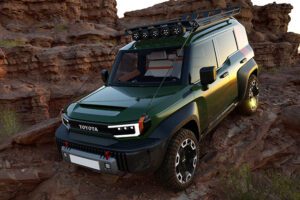