Nerf guns, also known as Nerf blasters, are toy weapons that shoot soft foam darts or balls. These guns are popular among children and adults alike and are often used in team-based games and competitions.

They come in a variety of shapes and sizes, from small handheld pistols to large rifles. Some Nerf guns even have attachments, such as scopes and drums, that can hold extra ammunition. The darts or balls shot from these guns are made of soft foam, so they are safe to use and won’t cause any harm if they hit someone. 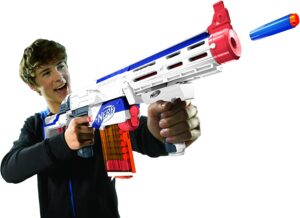 Another popular type of Nerf gun is the Nerf Rival series. These guns are designed for high performance and can shoot balls at a velocity of up to 70 mph. The Nerf Rival series also includes a variety of accessories, such as loading gates and magazine clips, to make the guns even more fun to use. 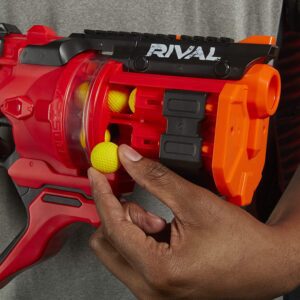 Nerf games are a great way to bond, laugh, and create lasting memories.

In addition to the different types of Nerf guns, there are also many different game modes that can be played with Nerf blasters. One popular game mode is “Capture the Flag,” where teams compete to capture the other team’s flag and bring it back to their own base. Another popular game mode is “Elimination,” where players try to eliminate each other by hitting them with Nerf darts.

Some other popular Nerf games are:

Capture the flag: This classic game is easy to adapt for Nerf play. Each team hides a flag somewhere on their side of the playing area, and the other team has to try to capture it and bring it back to their side. Players can only be eliminated by being hit by a Nerf dart or ball.

Zombie apocalypse: One player is designated as the “zombie,” and they have to try to “infect” the other players by hitting them with a Nerf dart. The infected players then join the zombie team, and the game continues until only one player is left standing.

Protect the VIP: One player is designated as the VIP, and they have to make their way across the playing area without getting hit by a Nerf dart. The other players are tasked with protecting the VIP and can use their Nerf guns to defend against attackers.

No matter what game you choose, the most important thing is to have fun and enjoy spending time with your friends or kids.

Overall, Nerf guns are a fun and safe toy that can provide hours of entertainment. Whether you are playing with friends or competing in a Nerf battle, these guns are sure to provide endless fun.

Single-shot blasters: These are the most basic type of Nerf gun, and they are typically smaller and easier to handle. Single-shot blasters have a limited range and require the user to manually load each dart or ball before shooting.

Multi-shot blasters: These Nerf guns are capable of shooting multiple darts or balls in rapid succession, without the need to manually reload each time. They typically have a larger magazine capacity and a longer range than single-shot blasters.

Automatic blasters: Also known as “machine guns,” these Nerf guns are capable of shooting multiple darts or balls in quick succession with the simple press of a button. They typically have a large magazine capacity and a longer range than other types of Nerf guns.

Rifles and shotguns: These Nerf guns are designed to look like real-life rifles and shotguns, and they often feature additional accessories like tactical rails and sights. They are typically larger and more Specialty blasters: These Nerf guns are designed for specific purposes, such as launching foam rockets or creating a foam “shield” to protect the user. They often have unique features and capabilities that set them apart from other types of Nerf guns.