One of the seven wonders of the world, the Great Pyramid of Giza has served as an enigmatic relic of ancient history for centuries. LEGO has added the Lego Great Pyramid of Giza model to its awe-inspiring Architecture collection so you can shrink this gigantic structure a little bit and put it in your room or office.

The new version consists of 1476 parts and includes all the details we expect from the Danish toy manufacturer. A worker’s village, the surrounding landscape accentuated by a portion of the Nile River, as well as an additional pair of pyramids and a burial temple, are very well designed with lifelike details.

When you reveal the cross-section of the pyramid by removing the outer shell, you come across a detailed interior. Under the shell, you’ll discover great tunnels, the King’s and Queen’s Chambers, and a unique stone movement system, the latter of which was probably used when building the actual pyramids. The Lego Architecture Great Pyramid of Giza beautifully mirrors the Great Pyramid of Giza as it appeared 4,000 years ago in its heyday, and mimics the shimmering white limestone strata that once covered its exterior.

Throw away all the conspiracy theories you’ve heard about the pyramid building process and take matters into your own hands with your very own pyramid building kit. The Lego Architecture Great Pyramid of Giza kit is scheduled to launch on August 1 for $130. Click here if you want more information. 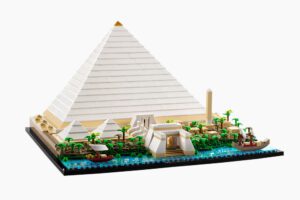 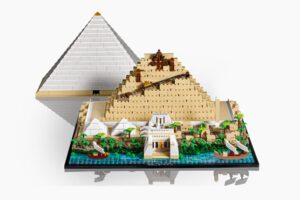 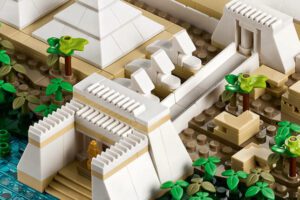 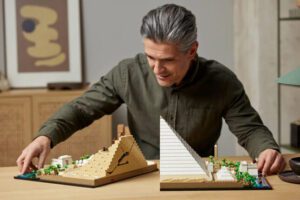