Director Taika Waititi inherited Thor property from Marvel for 2017’s Thor: Ragnarok, and that means not only is the series in good hands after the first two episodes but a character as bland as God of Thunder has been transformed into a superhero alongside the likes of Spider-Man and Iron Man. It also proved to be worth a stop. The producer almost completely overhauled the character of Thor and instilled in him a hard rock ethos and a distinct comedy identity. Waititi returns to directing the upcoming Thor: Love and Thunder, this time co-writing with Jennifer Kaytin Robinson. And now, thanks to the newly released trailer, we can finally get a real look at the movie.

This fourth solo film features Chris Hemsworth reprising the lead role, as well as members of the similarly bizarre Guardians of the Galaxy, which follows two beings linked at the end of 2019’s Avengers: Endgame. The trailer also shows us the official return of Natalie Portman’s Jane Foster as an iteration of Mighty Thor. Influenced by Jason Aaron’s 2014 comic book release, Foster is Thor‘s lover, the first mortal to wield a hammer. Portman last appeared in 2013’s Thor: The Dark World and did not return for Ragnarok. While not appearing in this teaser, another important new addition to the cast is Christian Bale as the villain Gorr the God Butcher.

Thor‘s relationship with the Guardians has never been a big part of comic lore, but team-building makes perfect sense here. While the first Guardians film gave new life to the inert Marvel Cinematic Universe in 2014 with its irreverent tone and rags mischief, Waititi‘s version of Thor is no different.

Many fans consider Thor: Ragnarok to be among Marvel‘s best for its kinetic fiction and deliciously revamped aesthetic, but with the addition of Guardians, there’s so much more to come. Thor: Love and Thunder hits theaters on July 8. Click here if you want more information. 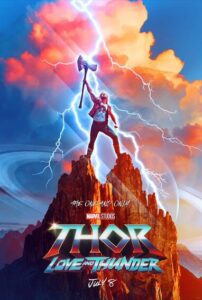