Whenever Manhart touches any vehicle with his skilled hands, the result is guaranteed to produce an impressive build. This is evident in its reinforced Bimmers and aggressive Audi work. Manhart has now announced plans to begin strengthening the newest Mercedes-AMG SL model in the three-spoke star’s portfolio, stealing a role from Mercedes-AMG, the performance sub-brand of Mercedes-Benz. Here is the Manhart SL 800 R

The revamped roadster is quite surprising when compared to the standard equipment option of the 2022 Mercedes-AMG SL, which offers 577 horsepower and 800Nm of torque, thanks to Manhart’s turbo performance kit with more than 800 horsepower and more than 999Nm of torque. Not to mention the turbochargers, the intercooler, the carbon fiber parts. But isn’t that exactly what is expected of Manhart?

While it’s tough to rival its enhanced performance specs, Manhart still managed to turn this magnificent car into a rather elegant speed beast. The SL 800 R is finished with a signature black exterior and accent gold decals, which is considered Manhart‘s signature. Complementing the sleek Roadster are Manhart‘s double-spoke Concave One wheels, accented with even more gold. Finally, the Manhart SL 800 R has been lowered for a sleeker, more aggressive stance.

No pricing information has yet been released for this improved Manhart SL 800 R. If you want to learn more about the vehicle, you can check the company’s website. 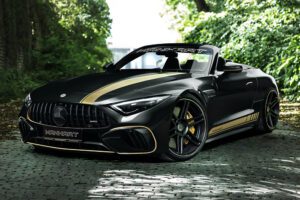 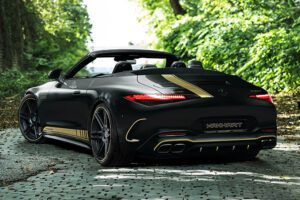